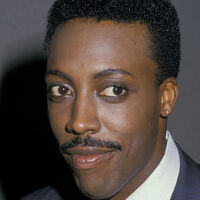 Arsenio Hall (born Arsenio Cheron Hall on February 12, 1956 in Cleveland, OH) is an African-American actor, comedian, talk show host, and game show host. He is mostly notable for his own late-night talk show, The Arsenio Hall Show from 1989 to 1994 and a short-lived revival of the same show from 2013 to 2014. He once appeared as a panelist on The Match Game/Hollywood Squares Hour.

Born in Cleveland, Ohio, the son of parents Fred and Anne Hall. His father is a Baptist minister. As a child, Arsenio performed as a magician. In 1973, he briefly attended John F. Kennedy High School before transferring to and graduating from Warrensville Heights High School in Warrensville Heights. After he graduated, Hall attended Ohio University, where he was on the speech team with Nancy Cartwright and Leon Harris. He then transferred to and graduated from Kent State University in 1977.

Arsenio later moved to Chicago and then settling in Los Angeles, to pursue a career in comedy. In 1984, he was the announcer/sidekick for Alan Thicke during the short-lived talk show Thicke of the Night (a role for which he has on occasion noted his confusion with Monty Hall). From 1986-1987, Arsenio was the original voice of Winston Zeddemore in the cartoon The Real Ghostbusters. In 1988, he landed his first major movie role as he co-starred alongside Eddie Murphy in the comedy Coming to America followed by a cameo in the 1989 film Harlem Nights, also starring Eddie Murphy (Arsenio's character in the film was the crying man).

In 1986, the Fox network introduced The Late Show Starring Joan Rivers, created to directly challenge The Tonight Show Starring Johnny Carson which dominated the late-night TV audiences. After a moderate start, ratings for the show sagged. Behind-the-scenes relations between Rivers and network executives at Fox quickly eroded with Rivers departing the series in 1987. The series was subsequently renamed The Late Show, and featured several hosts, including Ross Shafer, Suzanne Somers, Richard Belzer and Robert Townsend before it was cancelled altogether in 1988. In the fall of 1987, Aresnio was also chosen to host the show and his stint proved to be immensely popular, developing a cult following which eventually led to Hall landing his own show in syndication.

He signed a contract with Paramount contract to host his own nationwide syndicated late night talk show, The Arsenio Hall Show which made it's nationwide debut on January 2, 1989. The show became ratings gold, especially rating high among the coveted younger demographic and known for its audience's distinctive alternative to applause: chanting "Roo, Roo, Roo!," while pumping their fists. The practice soon became such a ritual that by 1991 had become a "pop culture stamp of approval" — one that Hall said had become "so popular it's getting on people's nerves." The gesture even made it into films of the time as Julia Roberts did so in the 1990 film Pretty Woman, Penny Marshall and Michael J. Fox in the 1991 film The Hard Way, the 1992 Disney animated film Aladdin with the Genie character voiced by the late Robin Williams and performing the gesture while mimicking the physical appearance of Hall. The gesture was also seen in the 1992 action-thriller Passenger 57, starring Wesley Snipes, in which an elderly airplane passenger confuses the character played by Snipes with Arsenio. At the end of the film, the elderly woman leads the other passengers on the hijacked plane to do the gesture toward Snipes' character after he saves the day.

Hall also had a rivalry with Jay Leno, after the latter was named the new host of The Tonight Show after Johnny Carson's departure and during which time Hall said that he would "kick Jay's ass" in ratings. He also used his fame during this period to help fight worldwide prejudice against HIV/AIDS, after NBA star Magic Johnson had contracted the disease. Hall and Johnson filmed a PSA about the disease that aired in the early 1990s.

After almost seven years, Arsenio filmed his last Arsenio Hall Show on May 27, 1994.

Between 1988–1991, Hall also hosted the MTV Video Music Awards. Since ending The Arsenio Hall Show, Hall has gone on to appear in other television shows and movies. He landed his very own short-lived sitcom titled Arsenio in 1997 (cancelled after only seven episodes) and co-starred alongside Sammo Hung on the CBS crime drama Martial Law which ran for two seasons from September 26, 1998 to May 13, 2000.

In 2003, he hosted a revival of the popular talent competition program Star Search on CBS (original host Ed McMahon appeared as a celebrity guest judge this version) and it was here he popularized the catchphrase "Hit me with the digits!". This version of Star Search ran for two seasons from January 2003 to April 2004.

In addition to appearing as a panelist on The Match Game/Hollywood Squares Hour, Arsenio also appeared as a panelist on the syndicated version of Hollywood Squares with host Tom Bergeron in 2003. He was considered to be the host of the newly syndicated daytime version of the NBC primetime game show Deal or No Deal and taped a pilot episode (there were six taped). However, by the time the daytime version series began on it's run on September 8, 2008, Howie Mandel, who was still hosting the primetime version at the time and originally turned down the opportunity to host the show three times in the past, was chosen as the host.

In 2012, Hall was a contestant on the fifth edition of NBC's Celebrity Apprentice, which began airing February 19, 2012. His charity was the Magic Johnson Foundation, which is dedicated to advancing economic and social equality by engaging minorities in every aspect of their communities; increasing academic and innovative achievement; and raising HIV/AIDS awareness, treatment and prevention. One memorable episode was when Hall angrily clashed with singer/songwriter Aubrey O'Day and resulted in her leaving Trump Tower, distancing herself from the rest of the competition. Despite his rivalry with O' Day, Hall befriended the rest of the cast. On May 20, 2012, in the live season finale, Hall faced off against singer and American Idol season 3 runner-up, Clay Aiken and history was made when Arsenio became the first African-American to become the Celebrity Apprentice winner, being "hired" by billionaire real estate investor Donald Trump. Hall won the $250,000 grand prize for his charity, in addition to any money he won for his charity for tasks he and his team won when he was a team leader on the show. Arsenio (along with previous Celebrity Apprentice winners Piers Morgan, Joan Rivers, and John Rich) returned to serve as a celebrity advisor during the Celebrity Apprentice: All-Stars season.

In 2013, Hall landed an opportunity to re-launch his famous late-night talk show as the show premiered on September 9 on Tribune owned stations and other networks via CBS Television Distribution. The revival was nothing like the original version and failed to attract an audience as it was cancelled after one season due to low ratings. The last taping of the 'new' Arsenio Hall Show aired May 30, 2014.

Fellow comedian George Lopez credits Arsenio for being the reason he had a late night show as Lopez had appeared on The Arsenio Hall Show more times than any other comedian. Lopez also requested Hall be a co-host on his late-night program Lopez Tonight (November 25, 2009) since he regarded Hall as his inspiration and the first "late night party show host".

Arsenio has one child, son Arsenio Cheron Hall Jr (born 1999) with Cheryl Bonacci (never married). Since his birth, Arsenio mostly took time off away from the public eye to raise his son (with the exception of hosting the Star Search revival) before resuming The Arsenio Hall Show in 2013. Hall had an interest in returning to the business eventually, but his decision wasn't confirmed until his appearance on Lopez Tonight in 2009 (although he initially considered a weekend show because he didn't want to compete in ratings against his friend George Lopez).

In 2009 after reports, Hall publicly acknowledged that he previously dated 80s pop icon & former American Idol judge Paula Abdul (who was also the choreographer for Coming to America) going back more than 20 years.

When asked about his charity selection on The Celebrity Apprentice, Arsenio said that about a month or so before he agreed to be on the show, his cousin died due to HIV/AIDS.