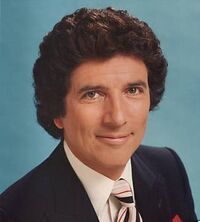 Bert Convy (born Bernard Whalen Convy; July 23, 1933-July 15, 1991) was an American Actor, Singer, and Game Show Host. He was best known for hosting the game shows Tattletales, Win, Lose or Draw, and Super Password. He also appeared as a semi-regular panelist on Match Game in the 1970s and hosted the pilot episodes of the early 1990s revival.

Born in St. Louis, Missouri, to parents Monica and Bernard Fleming Convy. When he was seven years old, Bert's family packed their bags and moved to Los Angeles. He later attended North Hollywood High School where he was known as an all-around star athlete. When he was 17, Convy was signed by the Philadelphia Phillies, played two years of minor league baseball in 1951–52. He later joined the 1950s vocal band The Cheers, who had a Top 10 hit in 1955 with Black Denim Trousers And Motorcycle Boots. Convy later attended UCLA School of Theater, Film and Television where he received a bachelor's degree.

Convy began his career in the entertainment field as a featured performer and singer in the Billy Barnes Revues in the 1950s and 60s. He appeared in the 1961 Warner Brothers drama Susan Slade, playing Troy Donahue′s rival for the affections of Connie Stevens. He then went on to become a Broadway actor, starring as Perchick in the original cast of Fiddler on the Roof in 1964, The Impossible Years in 1965 and creating the role of Cliff Bradshaw in Cabaret in 1966. He also appeared in the Roger Corman film A Bucket of Blood, playing Lou Raby, and a supporting role on the CBS soap opera Love of Life.

Beginning in the late 1960s and throughout the 1970s, Bert became a fixture in the game show world. He became a popular semi-regular panelist on several game shows, including What′s My Line?, To Tell the Truth, Match Game and on both Password and the revival Password Plus. He soon took the podium himself as host of several game shows beginning with Tattletales (he appeared on an episode of The Price is Right to promote the new series) from 1974 to 1978 and again from 1982 to 1984 (he appeared on The Price is Right again to promote the revival series), for which in 1977, he won the Emmy for Outstanding Game Show Host.

He also hosted the third revival of Password titled Super Password, which ran from September 24, 1984 to March 31, 1989 on NBC.

In the 1980s, Bert teamed up with Burt Reynolds and formed their own production company, Burt and Bert Productions. Their first production was a game show based on Pictionary titled Win, Lose or Draw, which made its televised debut in 1987 as part of the NBC daytime lineup and in nightly syndication. Convy hosted the nighttime edition (while Vicki Lawrence hosted the daytime edition) for its first two seasons, then parted ways with the show to host another of his company's productions, the syndicated 3rd Degree.

Aside from his game show hosting credentials, Convy was also a well known actor. He landed guest starring roles on shows such as Harrigan and Son, 77 Sunset Strip, The Mary Tyler Moore Show, Hawaii Five O, Perry Mason, and The Love Boat. He attempted a short-lived variety series called The Late Summer Early Fall Bert Convy Show in 1976. In 1979, he appeared with the Dallas Cowboys Cheerleaders in their eponymous TV movie.

In 1983, Bert was cast as Neil Townsend on the ABC sitcom It's Not Easy alongside Ken Howard. Convy had joined the project when it was recast after its intended premiere in the 1982–83 season was delayed; he earned the role originally which was originally given to Larry Breeding, who was killed in a car accident in September 1982 after the first pilot was shot.

Shortly after his latest game show 3rd Degree was cancelled, Convy was called upon by Mark Goodson Productions again to host a week's worth of pilot episodes for a revival of Match Game that Goodson was attempting to sell to ABC. In April 1990, Bert was admitted to Cedars-Sinai Medical Center after he collapsed while visiting his mother there, and was diagnosed with a glioblastoma multiforme. The inoperable tumor forced him out of the role as host of the Match Game revival as hosting duties were passed on to Ross Shafer.

On July 15, 1991, three days after the Match Game revival he would have hosted aired its final episode, Convy went into cardiac arrest at his home in Brentwood and died at the age of 57.

He has married twice, first to Anne Anderson in 1959 with whom he had three children: daughter Jennifer and sons Joshua, and Jonah. They divorced in 1991 and just a few short weeks later, Bert married his second wife, Catherine Hills just five months before his untimely death.

He is buried at Forest Lawn – Hollywood Hills Cemetery.