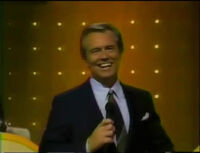 Bob Eubanks (born Robert Leland Eubanks on January 8, 1938 in Flint, MI) is an American radio, game show host and television personality. He is best known for hosting the game show The Newlywed Game in several stints between 1966 and 1999 as well as the CBS Daytime version of Card Sharks from 1986 to 1989. He once appeared as a panelist on The Match Game/Hollywood Squares Hour.

Born in Flint, Michigan, but raised primarily in Pasadena, California, he grew up listening to music, most notably favorites like Frank Sinatra and Doc Watson. His parents, John and Gertrude (née McClure), originally hailed from Missouri. They moved to Flint during the Great Depression, where their only child was born, before moving making the move to California. The young boy became a child model, doing photo shoots for ads and meeting his idol, Gene Autry, when he was scheduled to do an ad photo shoot with him.

Eubanks attended Pasadena High School, where he graduated in 1955. After graduation from high school, he would become one of California's most popular disc jockeys. In 1956, his first radio exposure was at KACY Radio in Oxnard, California. He joined KRLA in Pasadena in 1960 to do the overnight show.

In the spring of 1962, Bob was promoted to morning drive, then a year later moved to his long-running 6-9pm evening slot. During most of the 1960s, he produced sold-out concerts, such as The Beatles' 1964 and 1965 Hollywood Bowl performances, and The Rolling Stones, during the first two years of the American tour.

While still in Los Angeles, he also produced such artists as Barry Manilow, The Supremes, Dolly Parton, Bob Dylan, Elton John and Merle Haggard, among others.

In 1966, Eubanks' life would change forever after receiving a phone call from television personality and game show producer Chuck Barris about hosting a new game show for ABC called The Newlywed Game. The show made its debut on July 11, 1966 and became an immediate hit and the show's popularity led the network to expand the prime-time lineup, where it had run on the air for five years.

Eubanks was only 28 years of age when he began hosting. The Newlywed Game became widely popular for bringing a youthful energy to daytime television, pressing contestants into giving embarrassing and hilarious answers. The show also ranked as one of the top three daytime game shows for five consecutive years, between 1968 and 1973, and was ranked in the top three prime-time game shows, also for five years, between 1966 and 1971.

During his time on The Newlywed Game, Bob became known for using the catch-phrase, "Makin' Whoopee" in reference to sexual intercourse. Eubanks coined the term from the song of the same name, in an attempt to keep parents with young children from the need to explain the facts of life because of a television show. While the ABC network was comfortable with the term "making love", they did not allow the use of the word "panties".

When he was not hosting The Newlywed Game, Eubanks was also heavily involved in the country music business, serving as manager of such big name artists like Dolly Parton, Barbara Mandrell and Marty Robbins. He also signed Merle Haggard to an exclusive live-performance contract, producing more than 100 dates per year with the performer for almost a decade.

In 1974, after 2,195 episodes, The Newlywed Game came to an end, making Eubanks one of the world's most beloved and bankable game show hosts to date.

In 1985, Eubanks met with legendary game Sshow producer Mark Goodson about hosting a revival of one of his most successful franchises: Card Sharks for CBS. Jim Perry, who hosted the NBC version of the series from 1978 to 1981, was considered for both the daytime and nighttime versions of the new revival but was busy with the NBC game show $ale of the Century (in both daytime & syndication) and Definition in Canada.

On January 6, 1986, the revival of Card Sharks made its debut on CBS. A week before its debut, Eubanks made a special cameo appearance on an episode of The Price is Right to promote the series.

Bob hosted the daytime version of Card Sharks while the nighttime version was hosted by Bill Rafferty. Eubanks' version of the show ran for four years on CBS ending on March 31, 1989.

In addition to his work on both The Newlywed Game and Card Sharks, Eubanks has hosted a number of other game shows throughout his career including Trivia Trap, Dream House, The Diamond Head Game, Powerball: The Game Show, and All Star Secrets, where he also served as producer.

His final network game show was Family Secrets. Between 2002 and 2003, he hosted or co-hosted all five of NBC's Most Outrageous Game Show Moments specials. Eubanks was also one of three rotating hosts (along with Chuck Woolery and Jamie Farr) of the "$250,000 Game Show Spectacular" at the Las Vegas Hilton until the show closed in April 2008.

In 1969, Eubanks married Irma Brown, an avid athlete, ranch forewoman and artist. They had three children together, sons Trace and Corey, and daughter Theresa.

In 2000, Bob was honored with a Star on the Hollywood Walk of Fame. His star is located in front of Grauman's Egyptian Theatre, where he worked during the first years of his broadcasting career.

After nearly 32 years of marriage, his wife Irma passed away in 2002 after battling a prolonged illness. Sometime in 2004, Eubanks remarried. His current wife is Deborah James, a wedding/events coordinator in Ventura, California and has her own company, Bella Vita Events. They have a young son, Noah.

Also in 2004, he published his autobiography It's in the Book, Bob. In 2005, he received a lifetime achievement Emmy Award from the Academy of Television Arts and Sciences.