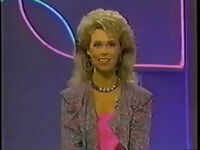 Elaine Joyce (born Elaine Joyce Pinchot on December 19, 1945 in Kansas City, MO) is an American Actress in film, television & Broadway. She is well known to TV game show audiences as a semi-regular panelist on the classic game show Match Game in the 1970s and as the host of The All-New Dating Game for one season from 1986-1987. She's also a native of Kansas City, Missouri of Hungarian ancestry.

In 1961, Elaine made her film debut as an extra in West Side Story and made uncredited appearances in several musical films, including The Music Man, Bye Bye Birdie, and Funny Girl before being cast in the films Such Good Friends and How to Frame a Figg in 1971.

A year later, Joyce made the move to Broadway, making her debut in the title role in Sugar, the musical adaptation of the film Some Like It Hot, in which she portrayed band singer Sugar Kane, the role originated by Marilyn Monroe in the movie. Her performance in the Broadway play won Elaine the 1972 Theatre World Award.

After her stint on the Broadway circuit, Elaine made the move to the small screen. She had recurring roles on the soap operas The Young and the Restless and Days of Our Lives and appeared in a string of guest-starring roles on shows which include The Andy Griffith Show, The Red Skelton Show, Love, American Style, Kojak, Green Acres, and Hawaii Five-O.

She co-starred alongside former M*A*S*H star Wayne Rogers in the 1976 television series City of Angels where she played Marsha Finch, the ditzy secretary to Rogers' Los Angeles private eye Jake Axminster and ran a call-girl service on the side. The series was short-lived as it ran from February 3 to May 18, 1976 on NBC.

Throughout the 1980s and 90s, she continued to appear in guest starring roles on shows including Beverly Hills 90210, Magnum PI, Simon and Simon, and Murder She Wrote.

Joyce was well known in the world of game shows for her appearances as a panelist on shows like Match Game, I've Got a Secret, and What's My Line?. In the mid-1980s, she was asked to host a revival of the classic game show The Dating Game. The newer version titled The All-New Dating Game debuted on September 15, 1986 in syndication. Elaine hosted the first season of the new revival while Jeff MacGregor took over for the remaining two seasons (ending its run on September 8, 1989).

Elaine has married three times. She was first married to Bobby Van, who also appeared as a panelist on Match Game and appeared together on the game show Tattletales. They married in 1968 and had one child, daughter Taylor. On July 30, 1980, Van died from brain cancer.

In 1985, she married a second time to television producer John Levoff and a year later, she gave birth to their son, Michael and they divorced in 1992. She married longtime Broadway playwright Neil Simon (best known for making the Broadway show, film, & TV series The Odd Couple) in September 1999, and they remained married until his death in 2018.