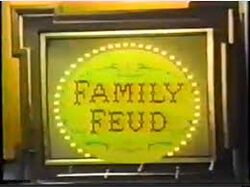 Family Feud is a spin-off of the "Supermatch" bonus round from Match Game along with its frequent panelist Richard Dawson as the host from 1976 until 1985 and again from 1994 until 1995. On the show, two families try to battle it out by answering survey questions that were being posed to 100 people. The first family to reach a set of points/dollars (mainly 300) gets a chance to play the Fast Money round for a chance at a grand cash prize.

At the beginning of each round, two members of each family come up to the main podium and play a mini-round for control of the question called the "Face-Off". The host announced how many answers are on the board (which are mostly in order based on popularity) and then read the survey question and the first player to buzz-in gets to answer. the player to give the number one answer or have his/her answer be higher than the other player's answer won control. In case of a tie (both answers with the same number of people who gave it) the player who buzzed in first won control. If neither player gave an answer on the board, the players at the main podium get a chance to answer for control. The player that won the Face-Off has a decision to either let his/her play the question or pass the question to their opponent. (excluding the 1988-95 era)

The family that won the face-off earns control of he question. The controlling family's job is to reveal the remaining answers hidden on the board with each correct answer adding points/dollars to the bank above the board. The answer's value is determined by how may people who gave it. Each player on the controlling team in turn gave an answer and if the answer he/she gave is correct, it is flipped over and revealed. Revealing all the answers on the board won the round (this is classified as a "clean sweep") Giving a wrong answer at any time earned a strike; getting three strikes caused the team to lose control of the question, giving the opposing family a chance to steal by giving one correct answer. A successful steal won the round, but an unsuccessful steal gave that round to the first family. The winning family of the round took all the points/dollars in the bank.

The first few questions had its values be worth the number showing. Later on In the game, the values of all the questions would be doubled; and still later usually on the last question, all the points/dollars values would be tripled.

The first family to reach a set number of points/dollars won the game. For most of the version, the goal is 300 points. From July 17, 1976-March 2, 1979 on ABC daytime, the first few months of the 1977-1985 syndicated version and 1975 pilot episode, the goal was 200 points; but in the final season of the Dawson version, the goal was set to 400 points. When the game takes way too long to reach the 300/400 point goal, Dawson goes to the controlling family to tell them that each teammate has three seconds to answer once he reads the question to them during the Triple round.

The winning family went on to play Fast Money for a grand cash prize ($5,000 in the ABC daytime version and $10,000 in the syndicated version). The winning family chose which two players will play the game. The first family member stood at center stage while the second member went offstage to a soundproof booth where he/she can't see and/or hear the first player's responses. The first player has 15 seconds (later 20) to answer five survey questions. He/She has to give the most popular answers to each question. When he/she was done, the answers were revealed on a different board followed by the number of people who gave them. The second player had 20 seconds (later 25) to answer the same five questions but with one exception: he/she cannot repeat (or duplicate) any of the answers previously given by the first player or a double buzzer will sound, at which point the host would say "Try Again!". The player must give a different answer (the second player will also be charged for similar answers or an answer which fits into the same category as the first player's answer). When the second player was done, his/her answers were revealed and scored on the board. The family wins $5 for each point made in that round, but if the two players manage to reach a score of 200 or more points, then the family wins the grand cash prize.