In 2006, CBS presented a special seven episode summer celebrity filled game show tournament called Gameshow Marathon. The show was based on the UK special of the same name hosted by Ant & Dec (in 2005) and later Vernon Kay (in 2007). This American version was hosted by former talk show hostess Ricki Lake. Gameshow Marathon was a seven episode special consisting of seven classic game shows and Match Game was the sixth to be played. In addition, six additional stars appeared as panelists for this show including original rotating panelist Betty White.

Match Game was the second of two semi-final games (the other was Card Sharks). It was played by Kathy Najimy & Lance Bass as the contestants.

These are the six other celebrities that were featured:
George Foreman
Kathy Griffin
Bruce Vilanch
Adrianne Curry
Adam Carolla
Betty White (the only celebrity from the original)

The game was played exactly like the actual series. That night it was played in Match Game PM mode. Kathy sat in the green triangle desk while Lance sat in the red circle desk.

Since Kathy played green by winning the coin-toss, she earned the right to pick a question. She selected Question A.

"Dumb Dora was so dumb (HOW DUMB WAS SHE!), she showed up for a baby shower wearing nothing but a [BLANK]."

No matches were made.

"I heard Paris Hilton wants to be a contestant on the next Survivor; but I can't imagine her going 39 days without [BLANK]ing."

No matches were made.

Since Kathy played first last time, Lance went first and got to pick a question this time. He selected Question A.

"Lorraine said, "It's weird being married to a dentist. Right before we make love, he says, "[BLANK]."

Lance's answer was "brush your teeth."

One match was made.

"This year, Hollywood is hosting the first plastic surgery awards. They are planning on giving the lifetime achievement award to [BLANK]."

Five matches were made.

At the end of the round, the score was 5-1 in Kathy's favor.

Since Kathy was leading at the end of the second round, she went first and got to pick a question. She selected Question B.

Betty was the only one to play since every other star was matched.

"Guess what, I went to a wedding where an exotic dancer got married. The ceremony was a lot of fun because all the bride's maids were wearing [BLANK]."

Kathy wins the game with the final score of 5-3.

Since the show was played in Match Game PM mode, there was two Audience Matches.

Kathy won $1,000 from the Audience Matches and was now going for 50 times the bucks or $50,000 for a home viewer. She chose George to be her head to head partner. 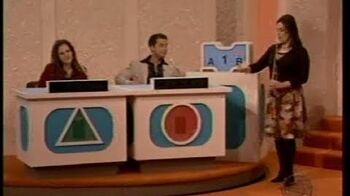