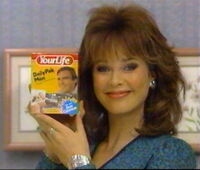 Holly Hallstrom (born Holly Anne Hallstrom on August 24, 1952 in San Antonio, TX) is a former American Model & longtime ex-Barker's Beauty on The Price is Right from 1977 to 1995. She also occasionally appeared as a semi-regular panelist on Match Game.

In her late teens and early twenties, Holly Hallstrom was a college student. To help pay for College, she booked part-time modeling gigs. While visiting Los Angeles, she landed the one gig that would change her life forever and say goodbye to her college studies. That gig was auditioning to become the newest Barker's Beauty on The Price is Right after previous model Anitra Ford chose to leave the program (to pursue a career in Real Estate & Photography) the previous fall.

First entering the doorways of The Price is Right beginning (airdate) January 3, 1977 (during model tryouts) and after a string of appearances with other guest models, Holly was chosen as the official, permanent model that February. She quickly became known for having mishaps, blunders, and bloopers with various prizes and set pieces which made her a favorite among the fans.

One of her most memorable bloopers on the show is the infamous Gibson Kitchen Appliances, which she battled with on three different episodes. The refrigerator door (third time the dishwasher) kept swinging back open as she attempted to shut it.

Another memorable Holly blooper was from a 1993 show where she was modeling a Jukebox while dancing with a male mannequin as the mannequin's pants started falling down as the audience exploded with raunchy laughter. She didn't notice this until announcer Rod Roddy finished reading the prize description and laughed herself with embarrassment.

In late 1983, Holly attempted to try her hand at acting as she parted ways with The Price is Right with high hopes of getting into the acting scene as various guest models filled her spot over the next period of months during her absence. In the spring of 1984, Holly returned to her role as Barker's Beauty on The Price is Right.

In September 1995, Hallstrom's world came crashing down after Bob Barker stripped her of her modeling job on The Price is Right. According to Barker, Holly was fired for "gaining weight". Hallstrom quickly fired back and revealed that the real reasoning behind her firing was because of her refusal to support Barker when Dian Parkinson, another ex-Barker's Beauty from 1975 to 1993, filed suit against Barker for sexual harassment. Holly also stated that Bob ordered her to make appearances of various talk shows and do radio interviews to say that Parkinson was lying and as well as being instructed to recall certain events differently than she had remembered them. Holly refused to get involved and did not want to perjure herself and she was fired. Her final appearance on The Price is Right aired on October 27, 1995.

Hallstrom and Barker battled in the courts for ten years and during that time period, Holly spent all of her savings and resources, sold her house and lived out in her car and eventually found work at a local ski resort in Utah. She would later become victorious in October 2005 when she received a multi-million dollar settlement, which she used to buy several houses in her native San Antonio, TX and also setting up foundations. She also sat for interviews on The Today Show and The View to discuss her victory win.

Holly has never married and has no children.