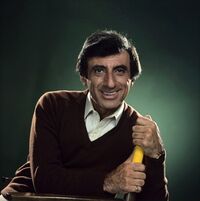 Jamie Farr (born Jameel Joseph Farah on July 1, 1934 in Toledo, OH) is an American Actor in Film, TV, and Theater. He is best known to TV audiences for his portrayal of the cross-dressing Corporal (later Sergeant) Maxwell Q. Klinger in the CBS television sitcom M*A*S*H. He is also very well known for his frequent appearances on Game Shows such as Pyramid, Super Password, and The Match Game/Hollywood Squares Hour.

Farr's first acting success occurred at age 11, when he won two dollars in a local acting contest. After graduating from Woodward High School, where he was one of the standouts among his class, Farr attended the Pasadena Playhouse where a Metro-Goldwyn-Mayer talent scout discovered him, offering him a screen-test for Blackboard Jungle. He won the role of the mentally challenged student, Santini. With the encouragement of his Toledo mentor, Danny Thomas, he decided to become an actor.

Jamie's first film roles were in 1955 in Blackboard Jungle (billed as Jameel Farah) and as a fruit vendor in Kismet (uncredited). After this, he was drafted into the United States Army, undergoing his basic training with the 6th Infantry Division Fort Ord California, he served for two years, with service in Japan and Korea. His service in Korea was after the hostilities had ended.

Although he was off to a promising start, roles were infrequent for Farr as he was casted in far more scaled down roles in film and TV such as and a delivery person, a post office clerk, an army surplus store clerk, an airlines reservations agent, and as an employee at a chinchilla ranch, all in all not very crediting roles. In 1958, Warner Brothers cast him as an airman in the Andy Griffith military comedy No Time for Sergeants, which also brought the young TV comic Don Knotts to motion pictures. Farr appeared as Thaddaeus in the 1965 film The Greatest Story Ever Told, along with minor roles in Who’s Minding the Mint? and With Six You Get Eggroll.

Jamie began to carve out his niche in television in the late 1950s, he became a regular on The Red Skelton Show before becoming a second banana with Harvey Korman on The Danny Kaye Show. Farr also appeared in a guest starring role on The Dick Van Dyke Show and a guest starring role on The Andy Griffith Show as a Gypsy. He was also a regular on the gangster-comedy series The Chicago Teddy Bears. Farr also worked in TV commercials, including a memorable spot for Wonder Bread (as a vendor who says, “If it isn’t fresh, I’m outa business!”).

In 1972, he was hired for one day’s work as Corporal Maxwell Q. Klinger in one of the earliest episodes of M*A*S*H (Chief Surgeon Who?). His character wore dresses trying (and failing) to convince the army that he was crazy and was deserving a Section 8 discharge. Comedy writer and playwright Larry Gelbart has said that comedian Lenny Bruce’s attempt to be released from military service in World War II by dressing in a WAVES uniform was the original inspiration for the character of Klinger on the sitcom. The character of Klinger proved to be a hit with TV audiences as Jamie was asked back for a dozen episodes in the second season before becoming a series regular for the remaining nine seasons. Eventually, his character gave up wearing women’s clothing (after a lecture from Colonel Sherman Potter, explaining how a Section 8 discharge would adversely affect his life) as the TV audiences saw Corporal Klinger become mature as he gradually progressed from being a cross-dressing visual joke into a more sensitive and resourceful character. In addition to Klinger's maturity, Jamie wore his actual issued set of U.S. Army dog tags. Farr, along with Alan Alda, William Christopher, and Loretta Swit were the only actors to appear in all 11 seasons of M*A*S*H.

Just a few short months after the series finale of M*A*S*H, Farr teamed up with co-stars Christopher and Harry Morgan for AfterMASH, the sequel that explored how civilian life treated their characters. The spin-off lasted two seasons from September 26, 1983 to May 31, 1985 and in 1999, Time Magazine listed the show as one of the 100 worst ideas of the century, and in 2002, TV Guide listed the show as the seventh-worst TV series ever.

Farr is also very well known to TV Game Show audiences for his frequent appearances on Game Shows such as Family Feud, Super Password, Body Language, the $25,000 & $100,000 Pyramid, and The Match Game/Hollywood Squares Hour. In 1984, he teamed up with Gimme a Break actress Kari Michaelsen as they competed against Wheel of Fortune host & hostess Pat Sajak & Vanna White on a celebrity episode of Dream House. He also served as a regular judge on The Gong Show alongside Arte Johnson and Jaye P. Morgan, whom Farr would later appear with on Hollywood Squares during "Game Show Week II" in November 2003.

Farr became a narrator for the game show documentary special called The Real Match Game Story: Behind the Blank which aired on GSN in 2006.

Some of Farr's TV movie and Film credits include Cannonball Run and Cannonball Run II (his appearance in 1989's Speed Zone makes him the only actor to have appeared in all three Cannonball Run films.) Made-for-TV movies include Murder Can Hurt You, Return of the Rebels, and For Love or Money. He also guest-starred in Kolchak: The Night Stalker as a teacher Mr. Burton.

He is also an avid golfer and since 1984, he has hosted an annual women's professional golf tournament on the LPGA tour, the Jamie Farr Toledo Classic, presented by Kroger, Owens Corning and O-I in Sylvania, Ohio. The tournament has raised over $6.5 million for local children's charities.

Farr has been married to Joy Ann Richards since 1963 and has two children, Jonas and Yvonne. He has a grandson named Dorian. Since the early 1990s, Farr has battled severe rheumatoid arthritis. In 2003, Farr and his wife wrote a children's story called Hababy's Christmas Eve, which retells the First Christmas from the point of view of the animals.