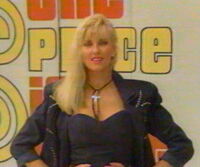 Janice Pennington (born Janice Maurine Pennington on July 8, 1942 in Seattle, WA) is a former American Model, Actress, and Author. She is best known for being the longest serving Barker's Beauty on The Price is Right for an impressive 28 years: September 4, 1972-December 15, 2000. She also appeared as a semi-regular panelist on Match Game, at least twice in the mid-1970s.

Native of Seattle, Washington, Janice Pennington landed her first job at the age of 19 as a dancer the Seattle World Fair. From there she went to Las Vegas where she worked as a dancer/show girl with such legends as Jimmy Durante and Eddie Fisher. At the age of 22, Janice was on the move again as she packed up and headed to New York to pursue her modeling career. She signed with the famous Eileen Ford Agency. Fashion photography and landed spots in various TV commercials for products including Dove, Chrysler, Max Factor, and Whirlpool.

Industrial films and small budget movies were a part of her growing career. For two years Pennington worked as an actress for Orson Welles in his last film The Other Side Of The Wind with such notables as Dennis Hopper, John Huston and Peter Bogdonavich. She also landed various guest starring roles on shows such as Ironside, Courtship Of Eddie's Father, and appeared opposite Elliot Gould in the film I Love My Wife.

Janice also performed as an entertainer on variety shows including Rowan and Martin's Laugh In, Bob Hope Specials, and Sonny and Cher, during her time on these programs, she worked with high-profile entertainers such as Sammy Davis Jr., Dean Martin, and Tony Bennett. In 1969, she became a regular on Laugh-In after actress Goldie Hawn decided to part ways with the show and focus on a career in acting.

In 1971, Pennington took it all off for the cameras of Playboy as she posed in the May issue of the magazine.

In September, Janice was one of the two prize models hired to shoot the pilot for a newly revamped version of The Price is Right for CBS with Bob Barker as its new host. Janice has the world record for having taped over 6,300 episodes of the longest running game show in the history of television, making her the longest-serving Barker's Beauty to date.

On the May 14, 1976 daytime episode of The Price is Right, a special showcase was presented, titled "Janice Pennington, This is Your Strife". This special showcase featured prizes (and clips) that Janice had some mishaps with: the Pop-Up bar that wouldn't pop up, the overstuffed refrigerator that nearly fell on her, and a convertible that she nearly crashed the bumper of when driving it out on stage for the pricing game Lucky Seven (fellow model Dian Parkinson drove it out on stage during the actual showcase). During the rehearsal of that show, the staff actually rehearsed a fake showcase so Janice would have no clue on what was happening.

However on a syndicated episode of The Price is Right that same year, during the game of Cliff Hangers, host Dennis James, who hosted the syndicated version until 1977, had referred to the mountain climber as "Fritz". He was not aware of Janice's heartbreaking and personal crisis as her then-husband Fritz Stammberger had disappeared while mountain climbing in Afghanistan. The contestant who played the game lost as the mountain climber went tumbling off the cliff as Dennis shouted "There goes Fritz!" which sent a devastated and distraught Janice running and remaining backstage crying; she did not appear on camera for the remainder of that show. Some game show fans have speculated that Dennis James was ultimately fired because of this.

On October 7, 1988, Janice suffered a serious injury after a cameraman swung his camera in the wrong direction during the opening as Janice was struck by the camera, knocking her into the audience; there was at least a 6-to-8-inch gap from the stage floor to the floor where the audience sits. She was badly injured and was immediately rushed to the hospital for surgery. The production of that taping was stopped for nearly an hour until the staff was assured that Janice would survive. The taping finally resumed with only her fellow models Holly Hallstrom and Dian Parkinson modeling.

Over the next several weeks, Pennington took some time off from the show to recover from her injuries and made her triumph return to the show on November 10 and even though she made a full recovery, she was no longer able to model swimsuits after the accident as her surgeries left some damaging scars on her shoulder.

In February 1989, Janice filed suit against CBS citing negligence. The case went to trial and in March 1992, a jury awarded her $1.3 million for injuries she sustained on the set of The Price is Right.

The Game Show world would never be the same again come October 2000 when Janice was dumped from The Price is Right, along with fellow model Kathleen Bradley, who'd been with the show since 1990, and several of the show's staffers. Though a reason was never given for Pennington's (and Bradley's) dismissal from the show, it was believed by many that she refused to testify against ex-Barker's Beauty Holly Hallstrom, who was dismissed from the program back in 1995, in her wrongful termination suit against Bob Barker and was fired as a result.

Janice was not given a proper formal sendoff by the show which left fans angry and outraged. Fans of the show were hurt by Janice's abrupt departure due to the fact that she had been with the show since its premiere episode dating back to September 4, 1972. Janice was not only dumped from The Price is Right, but she was also prohibited from publicly speaking against Bob Barker for possibly legal reasons.

Pennington has married three times, first to Glen Jacobson from 1964 to 1973. A year later, Janice married her second husband, Fritz Stammberger on May 12, 1974 and a year later, he disappeared while mountain climbing in Afghanistan and was declared legally dead in 1984. Her current husband is famed writer, Carlos De Abreu; they married on April 20, 1984. She also penned a memoir titled Husband Lover Spy about the disappearance of her second husband Fritz; she publicly released the book in early 1994.

She also has a younger sister, Ann Pennington, who occasionally appeared as a substitute Barker's Beauty on the syndicated version of The Price is Right with host Dennis James and was one of the card dealers on the NBC Game Show Card Sharks with Jim Perry during its first year in production in 1978.

Janice and her husband Carlos are also co-founders of the Hollywood Film Festival.