This is chronicling the 2008 pilot for a new version of Match Game for TBS.

The object of the game was to match as many of the celebrities as they can. At the beginning of each round, one contestant had a choice of two questions (A or B) leaving the other one for the other contestant. Each contestant was read a statement with a blank at the end or near the end. Then the six celebrities wrote down their answers to fill in the blank. When finished, the contestant in control gave an answer of his/her own after which the stars revealed their answers. Each time the contestant matched he/she scored a point but each celebrity can only be matched one time. Like Match Game PM the game was played in three rounds and the player who had matched the most celebrities at the end of round three won the game. The winner of the game won the right to play an all new Super Match.

The contestant's job is to fill the blank with the most popular answer. After the clock stops, the contestant is allowed to change two of them with the help of the celebrities (they only call on one, but helping is encouraged). For each correct guess of the popular answer, $200 is awarded. Then comes the standard Head-to-Head for 10x the money, up to $10,000.

The six panelists that were seen in the pilot were: (the late) Super Dave Osborne (a.k.a. Bob Einstein), Sarah Silverman, Scott Thompson, Rashida Jones, Norm Macdonald and Niecy Nash. In addition, Niecy Nash later became one of the rotating panelist for the rebooted ABC version (hosted by Alec Baldwin) in 2016.
In 2009, the pilot was later rejected in favor of the short-lived, late-night talk show called Lopez Tonight (hosted by comedian/actor George Lopez), the series itself ran for two seasons from 2009 until 2011.
On June 4, 2020; Pilot #1 (or "rough cut") was uploaded by veteran game show host Wink Martindale as part of his ongoing series called "Wink's Vault". 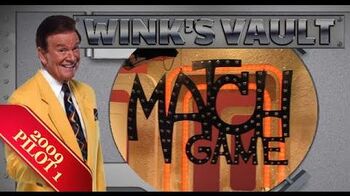