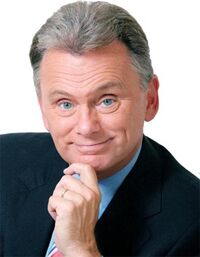 Pat Sajak (born Patrick Leonard Sajak on October 26, 1946 in Chicago, IL) is an American TV Personality, former TV weatherman, and Talk Show Host. He's best known for his long-running 34 year stint as host of Wheel of Fortune. He appeared as a panelist on the short-lived NBC Game Show The Match Game/Hollywood Squares Hour.

Born in Chicago to a Polish-American father. His first professional job was a desk clerk at Chicago's Palmer House Hotel. Afterward, he worked as a disc jockey for various stations, including Armed Forces Radio during an Army stint in Vietnam. He later worked the afternoon shift at WSM in Nashville, and as a weekend weatherman on the station's sister television station, WSM-TV (now WSMV). In 1977, he was spotted by representatives at KNBC Los Angeles, who chose him as their full-time weatherman.

In 1980, Pat was given a chance to try his hand at Game Show hosting as he hosted pilots for Ralph Edwards (Press Your Luck, based on the board game Simon and unrelated to the series hosted by Peter Tomarken) and Mark Goodson-Bill Todman Productions (Puzzlers, a clip of which was used in the first episode of Game Show Moments Gone Bananas), neither of the game show pilots worked out for Pat as he was reportedly told that he was too low key, not enthusiastic enough.

In late 1981, Sajak received the opportunity of a lifetime that would change his life forever. He was approached by Merv Griffin, a legendary Talk Show mogul and creator of the game shows Jeopardy! and Wheel of Fortune, asking him if he would be interested in becoming the new host of Wheel of Fortune after previous host Chuck Woolery, after seven years, parted ways the program after a bitter contract dispute with Griffin. Many NBC execs including then-president & CEO of the peacock network, Fred Silverman, told Merv that Sajak was too local and would not be a great fit. Griffin responded by imposing a moratorium on new tapings until Pat was hired and eventually he got what he wanted. On December 28, 1981, Pat made his debut as the new host of Wheel of Fortune, which was still a network program at the time.

Prior to his hosting debut on Wheel, Pat appeared as a celebrity panelist on the NBC Game Show Password Plus. After almost two years of hosting Wheel of Fortune, Pat's hosting duties expanded when the show went into syndication beginning on September 19, 1983 and continues today.

In early 1989, Pat continued on with the nighttime version of Wheel but withdrew as host of the daytime version to prep for his late-night talk show on CBS. On his final daytime episode, Pat made it a very memorable and one of the most talked about moments in all of Wheel of Fortune history when he said "Come here, baby" to his co-host Vanna White as the two shared a kiss as the audience went berserk and then suddenly out walks Wheel creator Merv Griffin, who really dropped by to wish Pat luck on his new show.

Sajak was replaced by ex-San Diego Chargers place-kicker Rolf Bernischke, who in turn, would be replaced by future Entertainment Tonight anchor Bob Goen as the show bounced from NBC to CBS (July 1989-January 1991) and then back to NBC (while continuing to taped at CBS Television City) before ending for good in September 1991.

Pat's late-night talk show The Pat Sajak Show, debuted on January 9, 1989, the same day he hosted his last episode of the daytime Wheel of Fortune, to respectable if not spectacular ratings. Slotted against The Tonight Show with Johnny Carson and launched a week after The Arsenio Hall Show, The Pat Sajak Show never went higher than third place due also to Nightline and Late Night with David Letterman. Various changes were made to the format, most noticeably cutting the runtime from 90 minutes to 60 minutes on beginning on October 30, 1989 and despite its numerous problems, CBS remained fully supportive of the show.

On April 13, 1990, CBS pulled the plug on Pat's talk show and it was pretty evident that show was doomed after March 30, 1990 when controversial radio host Rush Limbaugh guest hosted the program. Angry and furious audience members loudly denounced his opposition to boycotts against pro-life legislation in Idaho to the point where he was forced to finish the show in an empty studio, unable to discuss much of what he had planned (although Limbaugh did attempt to calm them down numerous times which only made audience members ever more angry).

Following the show's demise, Pat occasionally returned to the field through filling in on Larry King Live and filling in for Regis Philbin on Live! With Regis & Kelly on numerous occasions. In May 2001, Pat interviewed Rush Limbaugh, during which The Pat Sajak Show was mentioned and Rush claimed the dissenting audience members were planted by the show's producers as a publicity stunt but not very many believed his claims.

In 1994, Pat was honored by receiving a star on the Hollywood Walk of Fame and has won three Daytime Emmy Awards for Outstanding Game Show Host (in 1993, 1997, and 1998) and a Lifetime Achievement Award in 2011. In 1997, he pulled an April Fool's Day prank on fans when he and Wheel co-host Vanna White appeared as contestants on an April Fools Day edition of Wheel of Fortune. Alex Trebek took Pat's place in hosting the special episode while Pat's wife, Lesly, took Vanna White's place at the puzzle board. Both the winnings of Sajak and White were donated to charity (in this case, the American Cancer Society for Vanna and the Boy Scouts of America for Pat). In return, Sajak took Alex Trebek's place in hosting a regular episode of Jeopardy! that same day.

Sajak landed a small role in the 1982 movie Airplane II: The Sequel as a newscaster. In 1983, he appeared as radio show host Kevin Hathaway on the NBC Soap Opera Days of Our Lives. Pat has also landed other guest starring roles (as himself) on shows including 227, The A-Team, Rugrats, King of Queens, and Santa Barbara.

Pat has married twice, he was previously married to a woman named Sherrill Darnell and was a stepfather to her then-10 year old son, they divorced in the mid-1980s. Pat is currently married to Lesly Brown Sajak, a photographer, they married in late 1989. Together they have two children: son Pat Michael James (born September 22, 1990) and daughter Maggie Marie Sajak (born January 5, 1995), who is a Country Music Artist. The family divide their time between Los Angeles (where Wheel of Fortune is taped) and Severna Park, Maryland (where their home life is based).