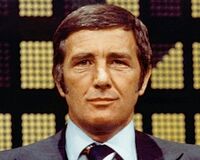 Born in Gosport, Hampshire on November 20, 1932 to parents Arthur and Josephine Emm. At the age of 14, he ran away from home to join the British Merchant Navy, where he pursued a boxing career. After his discharge, he pursued a comedy career using the stage name Dickie Dawson; when he reached adulthood, he revised this to become Richard Dawson, later making it legal.

In the early 1960s, Richard then pursued a career in acting. One of his first acting credits was appearing in the role of dapper entertainer "Racy Tracy" Rattigan on an episode of The Dick Van Dyke Show. He appeared in an episode of The Outer Limits titled The Invisibles and appeared (credited as Dick Dawson) in a 1964 episode of The Alfred Hitchcock Hour "Anyone For Murder?". He played a soldier in the 1962 film The Longest Day. In 1965, he had a small role at the end of the film King Rat ( starring George Segal) playing 1st Recon paratrooper Captain Weaver, sent to liberate allied POWs in a Japanese prison. By this point, Dawson had then made his home in Los Angeles, California.

It wasn't until September of 1965 when Richard garnered widely popular TV fame as Corporal Peter Newkirk on the CBS sitcom Hogan's Heroes, the show ran from September 17, 1965 to March 28, 1971. Following the cancellation of Hogan's Heroes, Dawson became a regular joke-telling panelist on the short-lived syndicated revival of the game show Can You Top This?. He was also a regular on Rowan & Martin's Laugh-In from 1971–73, and became a regular on The New Dick Van Dyke Show (1973–74). He portrayed a theater director in the first season of McCloud and was a panelist on the 1972–73 syndicated revival of I've Got a Secret. He played himself on an episode of The Odd Couple.

After Laugh-In was cancelled in 1973, game show pioneer Mark Goodson signed Dawson to appear as a regular on Match Game '73, alongside Brett Somers, Charles Nelson Reilly, and host Gene Rayburn. Dawson, who had already served a year as panelist for Goodson's revival of I've Got a Secret, proved to be a solid and funny game player.

During the show's very first week in production, Dawson sat in the third seat on the top tier (which would later be occupied regularly by Charles Nelson Reilly) before moving down to the bottom center seat.

Because of his charm and wit, he became the frequent choice of contestants for the "Head-To-Head Match" portion of the show's "Super-Match" bonus round, in which, after winning prize money in the "Audience Match" portion, the contestant and Dawson (or any celebrity the contestant chose) had to obtain an exact match to the requested fill-in-the-blank.

Richard was such a popular choice for the second half of the Super Match that the producers instituted a rule during 1975 which forbade contestants from choosing the same panelist for consecutive Head-to-Head Matches, in an effort to give the other celebrities a chance to play. After six weeks, however, the rule was discarded.

Beginning in 1978, the producers made a second attempt to ensure that each celebrity would receive a chance to play the Head-To-Head Match. Instead of the contestant simply declaring whom he/she would play the Head-To-Head match with, he or she would now do so by using a contraption known as the Star Wheel. Each of the six celebrities had their own colored section on the wheel, and after the contestant gave it a spin he or she played the Head-To-Head Match with the celebrity whose section the wheel pointer landed on. A contestant was required to spin the wheel so it made at least one complete revolution, otherwise the spin did not count. Ironically, the first time the wheel was spun, it landed on Richard, inspiring four of the panelists (including Dawson) to stand up from their places and leave the set momentarily out of disbelief!

In 1975, during his tenure as one of Match Game's regular panelists, Dawson was hired by Goodson to host an upcoming project titled Family Feud, which debuted on July 12, 1976 on ABC's daytime schedule. Family Feud quickly became a breakout hit, eventually surpassing the ratings of Match Game in late 1977.

By 1978, in addition to his hosting duties of Family Feud and still appearing on Match Game, Richard seemed distracted and grew increasingly distant, showing sign that he clearly didn't want to be there as the audiences quickly took notice. It also became known that he was not getting along with the producers behind the scenes, feeling burned out from appearing on two shows, he asked to be released from his Match Game contract. The producers refused his request and as a result, Richard rebelled by becoming sullen on the set, refusing to smile on camera, no longer joking or flirting with contestants, and even stopped speaking to his co-panelists.

More bad behavior on set assumed and finally after a while the producers had enough and dismissed Dawson and on his final appearance on Match Game, he was seen wearing dark tinted sunglasses because he scratched his eye and left a scar. This following week after Richard's departure, Bob Barker sat in the middle lower seat. After parting ways with Match Game, Dawson became heavily devoted to doing Family Feud and even won a Daytime Emmy Award for Outstanding Game Show Host in 1979.

In 1983, Richard guest starred as himself on an episode of Mama's Family titled "Family Feud" where the Harper Family appear as contestants on Family Feud (reuniting him with former Match Game co-panelists Betty White and Vicki Lawrence).

It has been believed by many that Dawson was not very well liked by his fellow game show colleagues. On the January 21, 1984 issue of TV Guide, Bob Barker, Wink Martindale, Bill Cullen, Jack Barry, Monty Hall, and Pat Sajak all appeared on the cover, Richard was supposed to appear on the cover as well but according to resources, he wanted to appear on the cover of TV Guide alone and did not want to share the spotlight. Monty Hall later said in an interview that Dawson's ego has gone wild.

One of his trademarks, kissing all the female contestants (on extremely rare occasions, Dawson would kiss a male contestant, most likely on celebrity specials) was one of the things that made the show appear to be a warm and friendly program which gave him the nickname The Kissing Bandit as Dawson explained on the 1985 series finale that he kissed contestants for love and luck, something his mother did with Richard himself as a child.

Two years after Family Feud ended, Richard parodied his TV persona in the 1987 film The Running Man, starring Arnold Schwarzenegger, in which he portrayed the evil, egotistical game-show host Damon Killian. Of Dawson's performance film critic Roger Ebert (who gave the film itself thumbs down) wrote, "Playing a character who always seems three-quarters drunk, Dawson chain-smokes his way through backstage planning sessions and then pops up in front of the cameras as a cauldron of false jollity. Working the audience, milking the laughs and the tears, he is not really much different than most genuine game show hosts – and that's the film's private joke.

On September 12, 1994, Richard made a comeback as he return to his hosting duties on Family Feud, replacing and succeeding Ray Combs for what would become the final season of the show's official second run (1988–1995). Upon Dawson's return, he received a standing ovation when he walked on set. Afterwards he said, "If you do too much of that, I won't be able to do a show for you because I'll cry." However one major difference that TV audiences immediately noticed was that he did not kiss the female contestants because of a commitment he made to his young daughter that he would only to kiss her mother. Unfortunately Dawson's comeback did not help boost the show's sagging ratings as the final episode aired on May 26, 1995. After his run on Family Feud ended a second time, Richard settled into a quiet retirement life. In 1999, he was asked to make a special appearance on the first episode of a new incarnation of Feud (with then-new host Louie Anderson), but declined the offer and wanted no more further involvement with the show.

Richard has married twice, he was first married to British film actress Diana Dors, they married in 1959 and they had two sons, Mark (born in 1960) and Gary Dawson (born in 1962), the marriage ended in divorce and Dawson gaining custody of their two sons.

He met his second wife, Gretchen Johnson, when she appeared alongside her family on Family Feud in the spring of 1981 and they had one daughter, Shannon Nicole Dawson.

On June 2, 2012 (ironically the same date, in 1996, his Family Feud successor/predecessor Ray Combs committed suicide), Dawson died from complications of esophageal cancer at the age of 79. On June 7, the Game Show Network aired a 4-hour special showing some of Dawson's greatest moments on both Match Game and Family Feud, including the first episode of Dawson's return season. His very last TV appearance was via satellite footage at the 2009 Game Show Awards as a tribute to legendary Game Show producer Mark Goodson.

Dawson is buried at Westwood Memorial Park in Los Angeles.